In January I went to L.A. for a couple of days, smart as I am I went back to Germany right during Grammy Week. Everybody is in town during that week, all the parties are going down, and I am leaving. I left on a Saturday, so the first pre-grammy parties went down Friday, I was able to catch at least one party. There are hundreds of parties in L.A. that night, so its hard to choose where to go, but Dre invited me to his Beats Music party, so how can you say no?

I got there pretty late, and nobody was allowed to go in at that point. Great! Even though I was on the list and everything, no chance. The capacity of the building was reached hours ago. So I kind of managed to get to the front of the line, since I was invited, I already had my wrist band. There were like 6 Security people at the door holding people back, and every minute somebody walked up to them and tried to talk their way in. Even I am usually good with that, what excuse can you give them? They already saying no to everybody. So while at the front of the line I got all the way against the wall and once security was in a discussion with somebody, quick turn, quick jump over the door band, quick fake conversation as I saw a guy that I never have seen before and … I am in!

Best move ever, best decision ever, since nobody really knew what was going on … everybody was there. I got in and ran right into the homie Crooked I. Turned around, here is Drake … took a quick photo of Crooked I and him, then made my way to the stage. Bone Thugs-N-Harmony just finished performing. Let me share the line up:

– Ice Cube: Today Was A Good Day
– Cypress Hill: Insane In The Brain
– Geto Boys: Minds Playing Tricks On Me
– Souls of Mischief: 93 til Infinity
– Pharcyde: Passin Me By
– Method Man & Redman: How High
– Bone Thugs-N-Harmony: Thuggish Ruggish Bone *that’s when I entered the building*
– Nas: Nas Is Like / If I Ruled The World
– Dr. Dre: California Love
– Black Street: No Diggy
– Diddy / Ma$e: Cant Nobody Hold Me Down / More Money, More Problems
– Busta Rhymes: Put Your Hands Where My Eyes Could See
– Eminem: My Name Is / Real Slim Shady / Lose Yourself 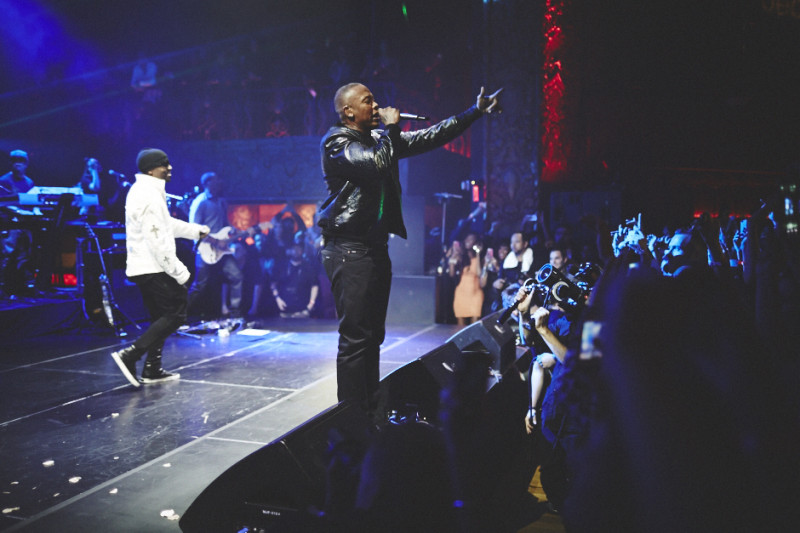